Hervey Bay’s WetSide Water Park has blitzed its 2019 attendance figures with tens of thousands of people visiting the top-rating venue in 2020 despite closing for six months due to the Covid-19 pandemic.

Mayor George Seymour said that as well as surpassing figures from previous years between January and March, residents and visitors also made up for lost time after the venue reopened in September.

“Between September 2019 and March 2020 when pandemic restrictions closed the venue, WetSide attracted 122,142 visitors, with 15,269 buying tickets for the slides.

“In December 2019, statistics showed 24,000 people had bought water slide tickets since the additional attraction opened at WetSide prior to Christmas in 2017.”

Cr Seymour said WetSide was a fantastic place to keep cool and have fun with something for everyone.

“In addition to the slides, there is the water play arena, TotSide for under 5s play and a Fountain Light Show on Saturday nights that is a sight to behold.”

“WetSide gained global attention in recent years and is currently the top-ranked water park in all of Australia: https://www.tripadvisor.com.au/TravelersChoice-Attractions-cWaterParks-g255055”

Cr Seymour said WetSide and its waterslides were all part of the Fraser Coast Regional Council’s plan to build better communities, maintain our unique lifestyle and grow our local economy.

Funds raised by waterslide rides help to offset the running costs for WetSide, which is free to use.

WetSide is open 7 days from 10 am to 5 pm during school holidays with more information available at www.frasercoast.qld.gov.au/wetside

The aquatic centres had over 24,782 teacher/student interactions over 10 weeks in Term Four.

This equates to over 12,000 hours of teaching children how to feel confident and safe in the water.

Most Fraser Coast children have visited one of Council’s aquatic centres for squad sessions, school break-ups, swimming carnivals and WetSide over Term Four.

WetSide visits throughout the school holidays increased 40 per cent from this time last year.

A priceless piece of Queensland’s railway history has reappeared after 127 years.

Ipswich railway enthusiast Merv Volker, who visited the Heritage City last week, has donated the name plate from the original Mary Ann locomotive to the Whistlestop museum where its replica locomotive is housed.

Mary Ann was the first steam locomotive built in Queensland by John Walker & Co. Ltd. in 1873 for William Pettigrew and William Sim.

The timber pioneers used the loco to haul logs in the Tin Can Bay area but she vanished in 1893 after a Mary River flood and fire at the Dundathu sawmill where she was stored.

In 1999, Maryborough engineer Peter Olds launched a full-size replica that he and his team at Olds Engineering built using just three historic photographs to guide its creation.

Where has Mary Ann’s name plate been for 127 years?

Mr Volker, a former Granville resident and now volunteer at the Ipswich railway museum, said he bought the solid brass curved plate bearing the name ‘Mary Ann’ from a long-time friend in Gympie.

“He had it for some years before I bought it from him 23 years ago,” Mr Volker said.

“I don’t know how he came to have it and I don’t want to say how much I paid, but it wasn’t a lot.

“Several times I’ve been going to bring it up to Maryborough but I’ve had doubts about its authenticity.

“I couldn’t give the museum something that was a reproduction. Peter can make his own reproductions – I don’t need to give them one.”

Is it the original name plate?

Mr Olds said he was thrilled to receive the “priceless” railway artifact from Mr Volker.

“It has to be the genuine plate,” he said. “You just can’t put a price on this type of history.”

Telltale signs include it having a reverse curve and no grooves on the back.

“We also got a piece of plate off an old boiler that’s three-foot six diameter and it fits exactly.

“And, the shape of lettering on the plate is identical to the lettering shown in the old photographs.”

Mr Olds said the name plate would have been attached to Mary Ann’s original boiler with two screws.

“There’d be steam pressure on those screws and they wouldn’t come out too easily. Whoever took it off would have had to do so with great care.

“It’s amazing the plate is still in such good condition, apart from being slightly bent.”

What will happen it the historic name plate?

“It’ll be on the rear end of the engine so passengers can see the plate from the front carriage, touch it and take photographs.” 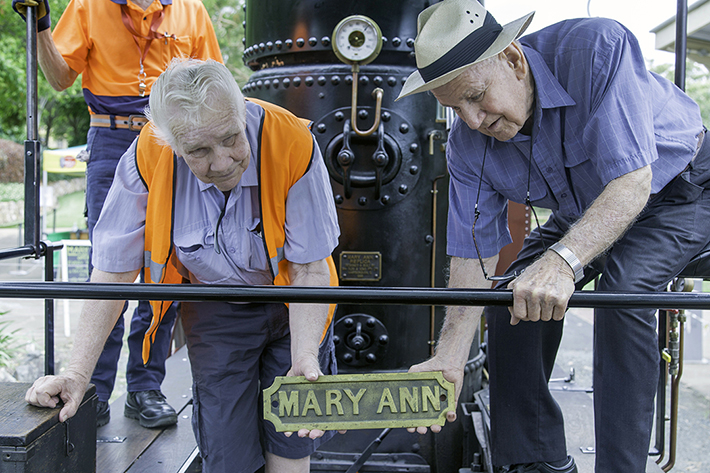 Merv Volker and Peter Olds show where the historic name plate will be placed on the rear of the replica’s engine.

Why donate it now?

When asked what prompted him to donate the plate now, Mr Volker said that being 76 years of age, the time had come to downsize his collection of railway memorabilia.

“There comes a time when you have to clean up after yourself,” he laughed.

“I have a large collection and if I was hit by a bus tomorrow, (my sister) Marilyn (Jensen) would have to clean it up.

“It’s a hell of a job. It’ll take me all year to dispose of it. We’ve been going a couple of months already and there’s still so much other stuff.

“My collection includes a lot of Queensland Railway china. I’m not letting that go, but the rest can go.

“Marilyn knows that if something happens to me, she’s to give the china to the railway museum at Ipswich because there are pieces in there they haven’t got.

“Different people who are involved in collecting railway history have different prime subjects. Some people collect tickets only. Others collect things such as lamps and uniforms.”

Call for more relics and photos

For more on Mary Ann’s history, visit https://maryboroughwhistlestop.org.au and https://en.wikipedia.org/wiki/Cooloola_Tramway

If you’re looking for a trendy pub meal in Hervey Bay, the Bay Central Tavern on Boat Harbour Drive is worth a visit.

My family and I have been keen to check out Hervey Bay’s eating places while visiting the city over the past year and a half. Previously we’d dinned out mainly in Maryborough because that was where I lived until November 2019.

Since then I’ve moved to Eli Waters at Hervey Bay, the other major city that makes up the Fraser Coast, so now we have many more eating places from which to choose.

Joining my two new friends, Jane and Margaret, at the Bay Central Tavern for lunch on Thursday, I loved the Thai Fried Noodles I ordered and the ladies gave me glowing reports of their choices so I knew my family would be keen to try out the tavern.

Saturday night would be somewhat busier than Thursday though.

The staffer who took my booking said that with country-rock band Eight Second Ride performing as part of their Goes Country Tour, management was expecting a full house but she could squeeze us in anyway.

After catching the tavern’s courtesy bus there, we found our booking had mistakenly been made for Sunday night. To the staff’s credit, they soon found a table for us in the bistro rather than on the deck where we were meant to be seated.

The error was a blessing in disguise.  It was much quieter in the bistro than sitting near Rocky the mechanical bull as wannabe rodeo riders tested their inner cowboys!

The eye fillet was quickly devoured with the comment that it was deliciously tender and full of flavour but the pepper sauce could have been hotter.

My Macadamia Barramundi, smashed chats and salad were all delicious and well presented.

The adults each enjoyed a glass of Wirra Wirra Mrs Wigley Rosé and finished our dinner by sharing a Brandy Snap Basket served with fruit salad and whipped cream.

Will we make the tavern our Local?

Are we likely to eat again at Bay Central Tavern? Definitely!

The service was spot on – everyone from the courtesy bus driver to the waitress was pleasant, helpful and welcoming.  The only improvement we can suggest is to boost the salad that goes with the Graziers Eye Fillet.

Perhaps we would choose a quieter night to visit but that’s our preference.

It was plain to see a lot of people loved the busy atmosphere, lapping up the live music and entertainment that kept the popular venue pumping throughout the evening.

We’ve also been told the massive outdoor screen is immensely popular on State of Origin nights and when other big sports and entertainment events are playing.